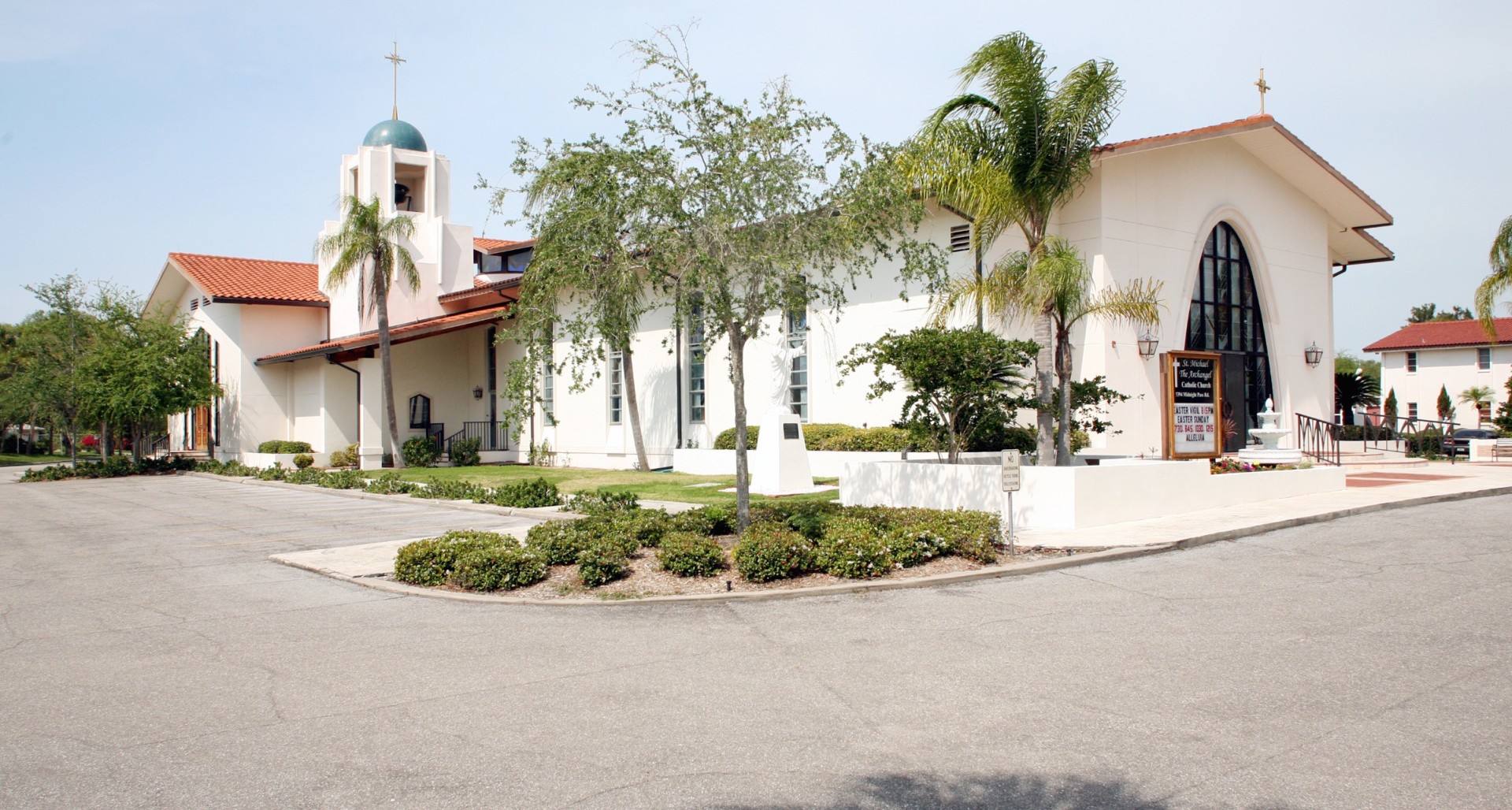 The Seven Signs of Sacraments

Celebrating a Sacrament This Year?

Holy Baptism is the basis of the whole Christian life, the gateway to life in the Spirit, and the door which gives access to the other sacraments. Through Baptism we are freed from sin and reborn as sons and daughters of God; we become members of Christ. We're incorporated into the Church and made sharers in her mission: "Baptism is the sacrament of regeneration through water and in the word." This sacrament is called Baptism, after the central rite by which it is carried out: to baptize means to "plunge" or "immerse"; the "plunge" into the water symbolizes the catechumen's burial into Christ's death, from which he rises up by resurrection with him, as "a new creature.This sacrament is also called "the washing of regeneration and renewal by the Holy Spirit," for it signifies and actually brings about the birth of water and the Spirit without which no one "can enter the kingdom of God."

Baptisms are held on Sundays after the 10:00 am Mass. Baptismal preperations are held by appointment only. To registerf or preperation or a Baptism, please call the Parish Office at 941-349-4174

Catholics believe the Eucharist, or Communion, is both a sacrifice and a meal. We believe in the real presence of Jesus, who died for our sins. As we receive Christ's Body and Blood, we also are nourished spiritually and brought closer to God.

Penance and Reconciliation has three elements: Conversion, contrition, and celebration. Conversion to Christ, the new birth of Baptism, the gift of the Holy Spirit and the Body and Blood of Christ received as food have made us "holy and without blemish," just as the Church herself, the Bride of Christ, is "holy and without blemish." Nevertheless the new life received in Christian initiation has not abolished the frailty and weakness of human nature, nor the inclination to sin that tradition calls concupiscence, which remains in the baptized such that with the help of the grace of Christ they may prove themselves in the struggle of Christian life. This is the struggle of conversion directed toward holiness and eternal life to which the Lord never ceases to call us. Contrition -"Penance requires... the sinner to be contrite of heart, confess with the lips, and practice complete humility and fruitful satisfaction." In this sacrament, we receive God's uncontional forgiveness; as a result, we are called to forgive others unconditional forgiveness; as a result, we are called to forgive others.

Confirmation is a Sacrament of mature Christian commitment and a deepening of baptismal gifts. It is one of the three Sacraments of Initiation. It is associated with the gifts of the Holy Spirit. "From that time on the apostles, in fulfillment of Christ's will, imparted to the newly baptized by the laying on of hands the gift of the Spirit that completes the grace of Baptism. For this reason in the Letter to the Hebrews the doctrine concerning Baptism and the laying on of hands is listed among the first elements of Christian instruction. The imposition of hands is rightly recognized by the Catholic tradition as the origin of the sacrament of Confirmation, which in a certain way perpetuates the grace of Pentecost in the Church." Very early, the better to signify the gift of the Holy Spirit, and anointing with perfumed oil (chrism) was added to the laying on of hands. This anointing highlights the name "Christian," which means "anointed" and derives from that of Christ himself whom God "anointed with the Holy Spirit." This rite of anointing has continued ever since, in both East and West. For this reason the Eastern Churches call this sacrament Chrismation, anointing with chrism, or myron which means "chrism." In the West, the term Confirmation suggests that this sacrament both confirms baptism and strengthens baptismal grace

For Catholics, the Sacrament of Marriage is "The matrimonial covenant, by which a man and woman establish between themselves a partnership of the whole of life, is by its nature ordered to the good of the spouses and the procreation and education of offspring; this covenant between baptized persons has been raised by Christ the Lord to the dignity of a sacrament."

Please call the Parish Office AT LEAST SIX MONTHS PRIOR to your desired date.

Holy Orders is the sacrament through which the mission entrusted by Christ to his apostles continues to be exercised in the Church until the end of time: thus it is the sacrament of apostolic ministry. There are two different ordinations: to presbyterate and to diaconate.

THE ANOINTING OF THE SICK

The Sacrament of the Sick, formerly known as Last Rites or Extreme Unction, is a ritual of healing appropriate not only for physical but also for mental and spiritual sickness. "By the sacred anointing of the sick and the prayer of the priests the whole Church commends those who are ill to the suffering and glorified Lord, that he may raise them up and save them. And indeed she exhorts them to contribute to the good of the People of God by freely uniting themselves to the Passion and death of Christ."

"Heal the Sick!" The Church has received this charge from the Lord and strives to carry it out by taking care of the sick as well as by accompanying them with her prayer of intercession. She believes in the life-giving presence of Christ, the physician of souls and bodies. This presence is particularly active through the sacraments, and in an altogether special way through the Eucharist, the bread that gives eternal life and that St. Paul suggests is connected with bodily health.

The Anointing of the Sick can be offered when someone is seriously ill, requires surgery, or if the same illness or condition becomes more serious. Please call the Parish Office (349-4174) if you would like a Priest to offer you this sacrament and arrangements will be made to meet you after Mass